The Malmesbury Mash was my second Calendar** Audax of the year. It is a 125mile/200km Audax starting at Cardiff Gate and taking the main roads through Newport and out to Chepstow, before riding over Hawkesbury Moor to Malmesbury, and then returning to Cardiff via Slimbridge. The route and elevation ride are shown below: 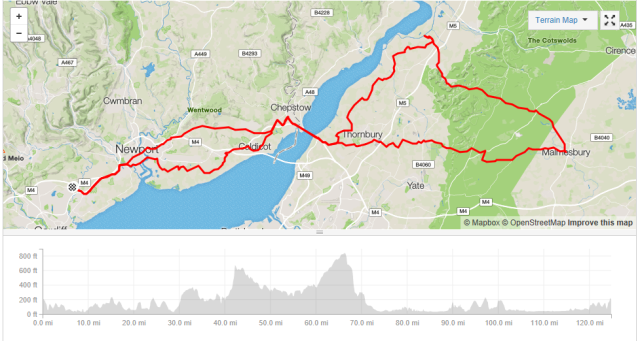 I was up at 05:15 to get ready and have some breakfast before driving to Cardiff Gate for a 07:00 start. I arrived at about 06:30 and spent the next 20minutes getting dressed and making sure my bike was ready for the days ride.

At 07:00 we were off, there was about 50-60 of us doing the ride, most of whom I would not see for the rest of the day. The ride out to Chepstow and over the Severn Bridge was relatively quick and uneventful, with no real hills to speak of. Once over the bridge we continued eastwards towards Malmesbury. It was still quite flat when we hit Hawkesbury Moor with the ride up to Somerset Mount at 43 miles/69km being the first big test of the day with gradients of between 8 and 10% for the final kilometer of the climb. By this time the mist had come down so there was no view to be appreciated when we got to the top. Once at the top of the climb it was downhill all the way into Malmesbury. By the time I reached Malmesbury at 55miles/89km I was on an average of 16mph. Amanda’s Cafe provided some very fine bacon, eggs, toast and tea before setting off north east to Slimbridge. On leaving Malmesbury it was uphill for the next 12miles/18km although at a gentle but relentless gradient of between 1 and 3%. On reaching the peak of that climb there was an immediate and exhilirating 2.5mile/4km twisty downhill stretch reaching speeds of up to 40mph and gradients of 15%, before a steady final few miles out to Slimbridge and a pub stop for a cider and some crisps. I was still doing well by this point averaging 15mph with 77miles/125km completed. Only 50 fairly flattish miles back to my car now. Thats when my legs decided to start complaining and the next 25miles/40km back to Chepstow were painful and not pleasant. Maybe it was the cider, maybe a lack of food, I don’t know! In Chepstow there was a quick stop to take on some “fuel” with a Pasty and a bottle of Coke, and I was on my way again feeling much better and Imade good progress back to Newport and then on to cardiff. I completed the 125mile/200km ride at an average of 14.5mph, arriving back at 16:45.

All in all a good day out on the bike which I was very pleased with. I did come away from the ride with some lessons learnt 1) knowing that if I am to go further I need to get more miles in between Audaxes, 2) probably best not to drink cider while on a ride and 3) that I need to lose some weight !!!

One thought on “The Malmesbury Mash 200km Audax”

This site uses Akismet to reduce spam. Learn how your comment data is processed.

Beyond the Goldfish Bowl of Christian Religion

with an 84 year old Questioner

Reflections on life, love and grace

The Adventures of a Cyclist Who Carries Too Much Stuff

For those attracted to Jesus but not to the baggage often attached to his message.

Writing to explore what life is about. Amidst its captivating beauty and deepest pain. In the hope that we can learn, grow and be inspired together.

lovefirst. a journey. a journal

Where love is, God is.    “Yes, it is love that will save our world and our civilisation, love even for enemies.” Martin Luther King Jr

How to be a modern hunter-gatherer, by bike

Chief of the least

Christ came into the world to save sinners, of whom I am chief....

A worship leader's missus and her views from the pew

Reflections on faith in a messed-up but beautiful world